Get Your Dream Oasis on a Budget

It can be difficult to wrap your mind around this because we have become numb to mid-to-high five-figure bathroom remodels that begin by ripping everything down to the studs. For these,  ​everything must be tossed and replaced by the most premium materials.

The quick, easy, and cheap bathroom remodel detailed here and will not make you the star of cocktail conversations because you won’t be able to brag about how you had to take out a second mortgage to afford the remodel. Instead, you’ll have lots of money left over to spend on other parts of the house–or other parts of your life.

In the end, you will have a clean, bright, and functional bathroom. And more money in your bank account than homeowners who went the expensive route. 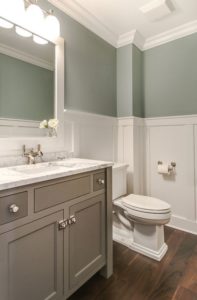 Cover and Re-Surface Instead of Replace

This is the guiding principle of any surface-level renovation, with the caveat that you never want to cover

anything because it needs to be replaced.

For example, in bathrooms, there is no better way to cover up the lower portion of walls than with easy-to-install wainscot.

Wainscot is a pre-fab board that extends as high as 48″ and eliminates the need to fix any unfortunate wall dings and minor holes. But should that wallboard be speckled with mold and mildew, the last thing you want to do is cover it up. Unfortunately, you need to track down the source, stop it, and replace affected portions of wallboard.

More and more, the less expensive alternatives are looking as good as the originals. Instead of real wood plank flooring, try luxury vinyl flooring. You only think you want that radiant-heat granite floor. But that purchase alone will blow your entire remodel budget.

Old-school vinyl is gone; things have changed. Vinyl now looks better than ever, with innovations such as luxury vinyl flooring (LVF) and plank vinyl that look fantastic.

Refinish Tub Instead of Replacing It

Bathtub or shower refinishing is a prime example of “cover, not replace.” If the problem is mainly cosmetic–a yellowed surface and some cracks and nicks–you can refinish your shower or bathtub.

Alternatively, bathtub and shower liners–a staple of infomercials–are not as cheap as they seem. Never a permanent fix, they will carry you through a few years. Liners require professional installation. Refinishing, instead, is cheaper and looks better.

Install a Pre-Fab Shower Rather Than a Tiled Shower

Have you decided that your tub or shower is beyond refinishing?  The absolutely most expensive option is hiring tradesmen to build a unit out of tile from scratch.

Instead, consider pre-fabricated shower units. If you absolutely must have that tiled shower, fusing a poly shower pan with the tile saves some hassle and a little bit of cost. 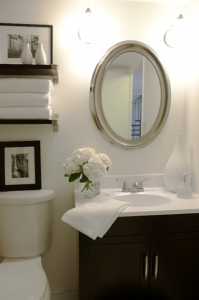 Do not call in the plumber to switch out the old toilet. Install your toilet yourself. It is much easier than you can imagine, the hardest part being physically moving the toilet into place. For that, get a cheap hand truck or enlist the services of a friend.

Paint Portions of Your Interior By Yourself

Do not use a painter. For whole-house painting, you may want to consider hiring a professional painter–due to the large scale.

But consider how little painting you need to do in bathrooms:  walls are taken up with mirrors, showers, tile, bathtubs. In the end, you only have a few square feet to paint. You can paint this by yourself in two days.

Freshen Up To Sell

Kitchen Renovations: Where to Begin?